Australia’s 2019—20 summer bushfires, known as ‘Black Summer’, directly caused the deaths of 33 people; 3 billion animals were killed or displaced, and over 3,000 homes destroyed, in Australia’s hottest and driest year on record (Commonwealth of Australia 2020: 5). In New South Wales, 7% of the state burnt and 26 lives were lost (NSW Bushfire Inquiry 2020). In the Shoalhaven, where these photos were taken, the ‘Currowan Fire’ ignited on 26 November 2019 on the northern edge of Eurobodalla Shire burned north for 74 days across 499,621 hectares, spanning four Local Government Areas (LGAs), destroying 312 homes (286 of which were in the Shoalhaven LGA), damaging another 183, and causing the death of three people near Conjola and Sussex Inlet on New Year’s Eve. The Currowan Fire was extinguished on 8 February 2020 (SBS 2020; NSW Bushfire Inquiry 2020).

January: NYE, around 6 pm my daughter and I returned to our street. We, along with my sister, had fled around midday, when flames arrived through the bush, to the paddock across the road from our house.

It was chaos. Each of us left in our own car. At the highway turnoff we became separated from my sister. We remained separated for five days. On the highway, my daughter and I were stopped by flames. We met the Bellamy family, and were offered shelter at their farm.

The Bellamys took in five strangers from the highway. One man left soon after arriving. Not believing he would be safe at the farm, he preferred to try his luck back on the highway. Two elderly neighbours also arrived, seeking help. In the end ten people and our old dog stopped at their farm. Soon fire surrounded the property. We were trapped. The fire came up from the valley, ran alongside the house on two sides, then swung around to the northwest, flicking at the chook pen and a granny flat attached to the garage. Seven of us fought the fire for five hours. A big old turpentine tree near the house caught fire and burnt for days. Three farm houses nearby and some large sheds burnt down. Working together, we saved the Bellamy house. A man living alone on the farm next door died.

Once the fire front had passed, my daughter and I drove home. It was early evening. Our house was still standing. 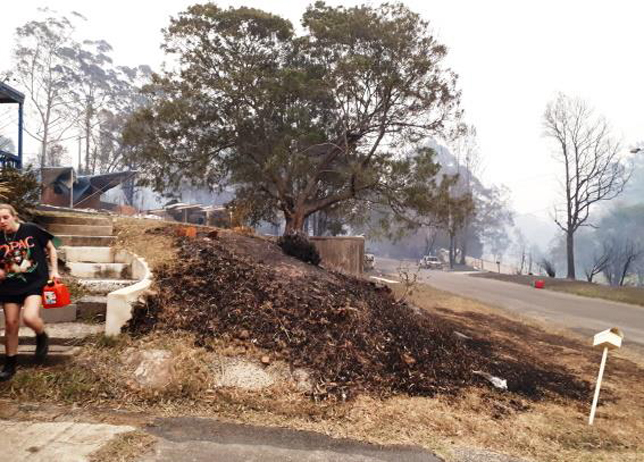 We took a small jerrycan of petrol from the house. We needed petrol for the pump at the farm.

That evening I saw the three burnt cars. If you look closely at both photos, you can see two cars parked on either side of the road, at the end of our street. They were parked in front of a grey house and belonged to the family renting the house. 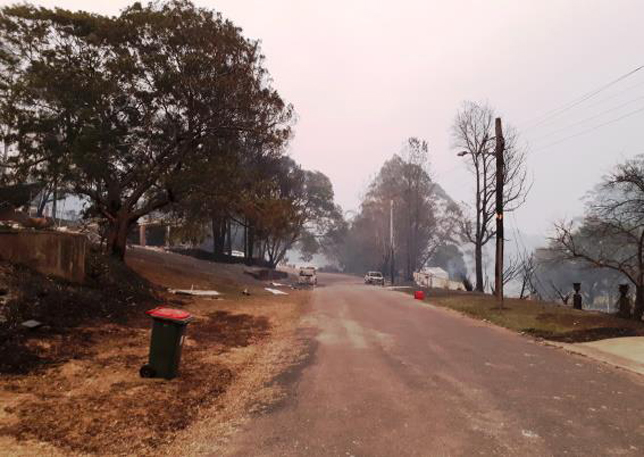 In the second photo the power pole across from our house is still alight. On seeing that, I thought my house would burn: I thought the pole would fall and set fire to the tree. Everything was still smouldering and burning. Burnt pieces of houses and fences were white hot. We were too frightened to stay. We left again, leaving the power pole to burn. That night some houses did burn down. Some were looted.

We returned to the Bellamy farm, and continued putting out burning trees and cattle yards. 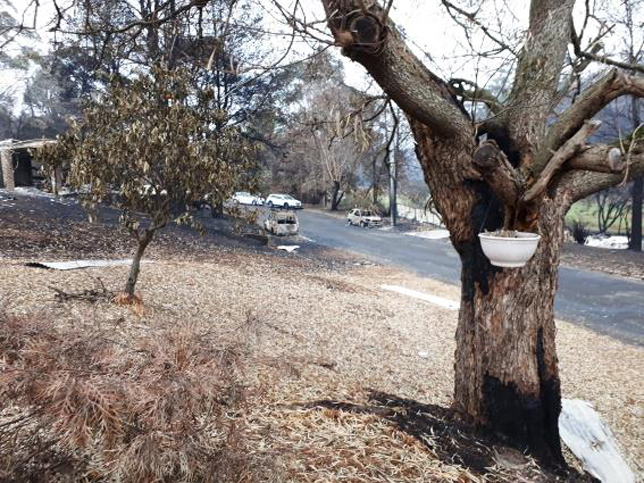 On 6 January, the highway reopened, and I returned home with the dog. A roadblock was in place: only residents allowed in. Burnt houses and cars remained as I had left them on NYE. I was without power for eleven days. My daughter remained evacuated in Dapto. My sister returned to Canberra.

Using my phone, I started taking photos of the cars. In this photo all three remain parked. 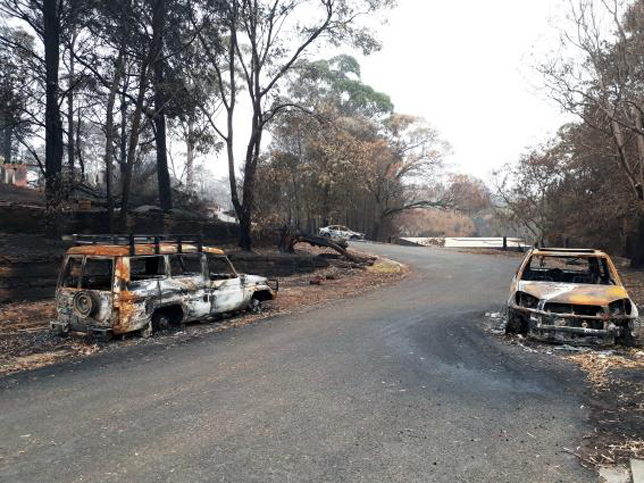 Those of us who remained tried to process the unimaginable. We heard each other’s survival stories. Television crews arrived and took photos of the cars. My village became international news. The crew from Switzerland left a camera tripod behind. We tried to return it, but police accused the neighbour, who was the contact, of stealing it. The same neighbour set up a marquee on their verge, sharing essential supplies. 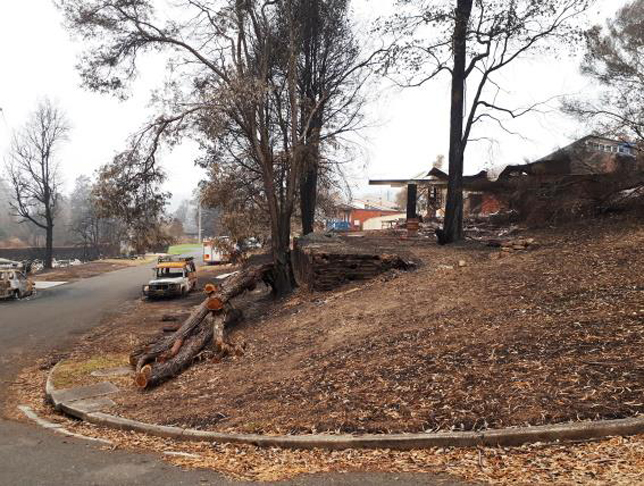 February: Two burnt cars were taken away. The 4WD Troopcarrier remained. I didn’t take photos of it in February; it belonged to others. All of us here were trying to be respectful of other people’s burnt property. All of us were fed up with looters.

I never saw the renting family again. I saw tourists drive past, despite the road block. They stopped by the 4WD and took photos. They took photos of themselves standing in front of other people’s burnt houses. Dark tourism.

Three young guys came and opened the bonnet of the 4WD and looked inside. I think they took one of the number plates.

March: We started to notice COVID. I went to the pub for last drinks with my sister. We prepared for a pandemic with sisterly cocktails. 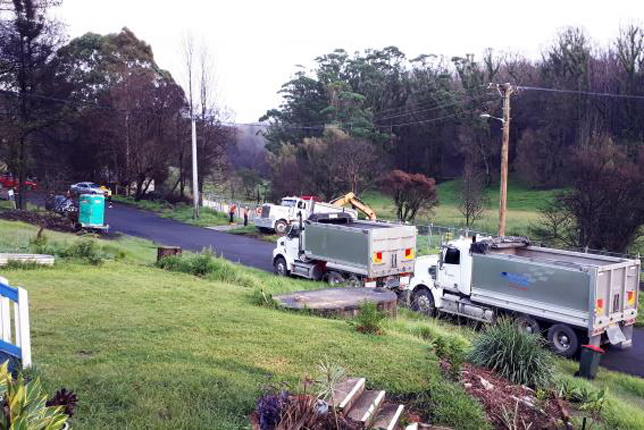 Laing O’Rourke — a multinational company hired to clean fire grounds — arrived, and smashed the remains of five of the seven burnt houses on my street. They were only paid to remove burnt cars that were parked inside the garages of burnt houses. Now and then I saw a flat top truck go past, carrying yet another burnt-out car.

The burnt 4WD got pushed aside to allow machinery to access burnt houses. Workers planted their Port-A-Loo behind it as privacy for toilet breaks. In the photo you can just see part of it sandwiched between a worker’s unburnt car and the ’Loo.

April: Neighbours started calling the burnt 4WD ‘Troopy’. I started to think Troopy had personality. I imagined Troopy had once had off-road adventures.

My garden started to grow back. In this photo Troopy has settled well into the shadows at the end of my street. 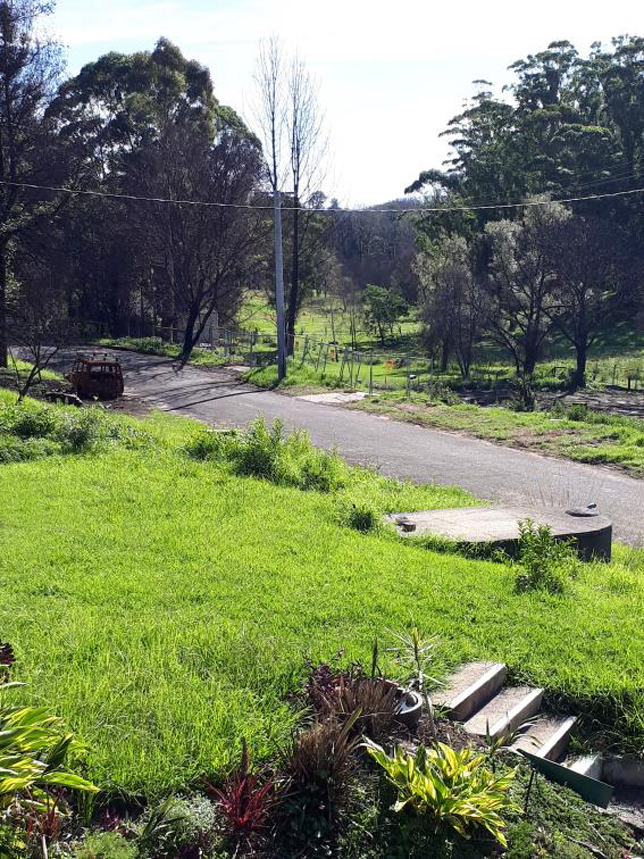 May: Three older men came and walked through the remains of the asbestos-contaminated house above Troopy. I asked them who they were and what were they doing. They claimed to know the owner. I reckon they were looking for metal to salvage for cash. 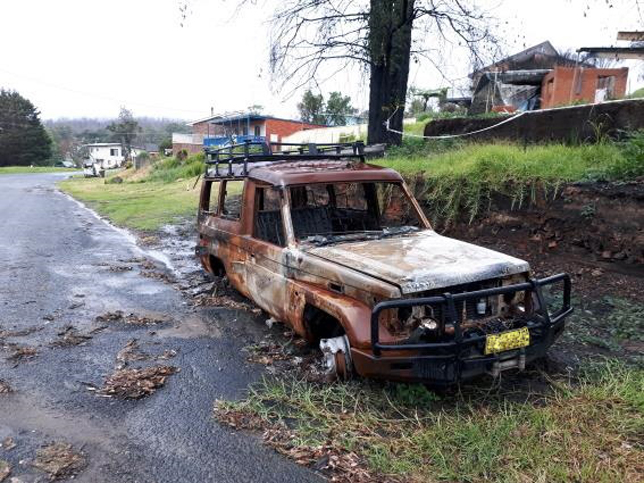 They looked over Troopy carefully, then left without taking anything. They knew I had noticed.

June: We were in lockdown. I spent most of the month alone. Laing O’Rourke carefully cleared the last two burnt houses next door. They were asbestos-contaminated, difficult houses.

I tried to breath clear air, but it still felt gritty. I had layers of dust. Minute particles from burnt houses had fallen silently into the cracks of the unburnt houses. The unburnt houses took on the DNA from houses we had lost. 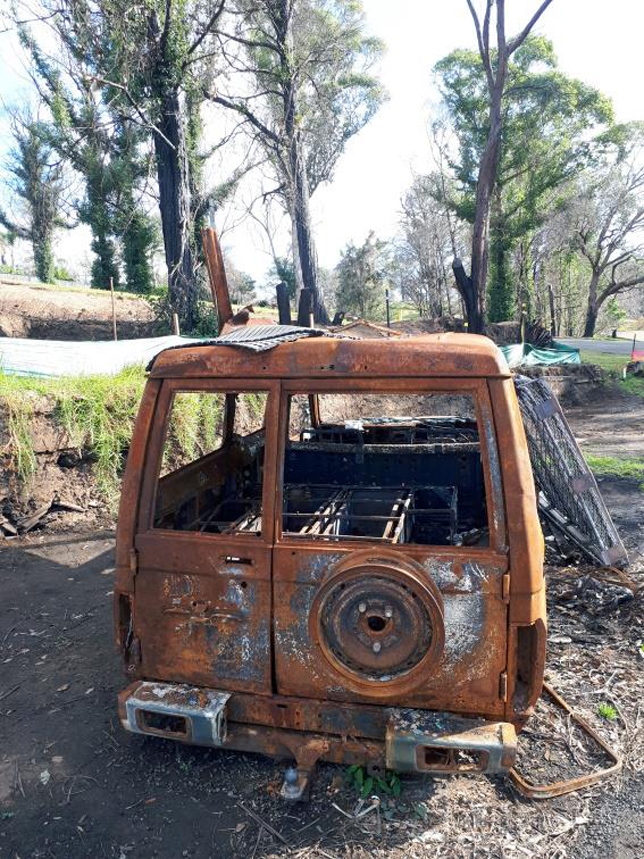 I fantasised about camping. I wished I had a Troopy to take me to a hot dry river gorge. I imagined a road trip to the Flinders Ranges. COVID closed borders. Troopy rusted.

July: I tried to burn the big tree stump without luck. Neighbours down the valley burnt piles of dead trees. The noise of chainsaws was constant. 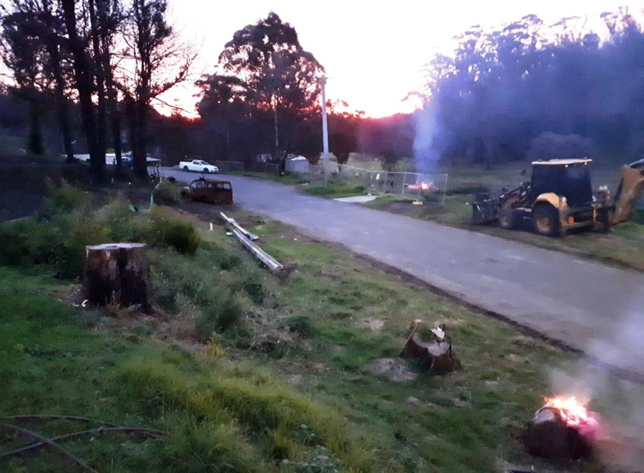 We got a big East Coast low. The creek in the paddock, which the fire had jumped to reach houses, flooded. If families hadn’t been burnt out of their homes, they would have noticed their back yards under water. 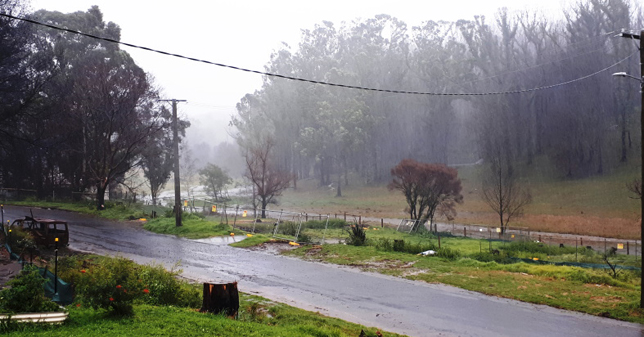 I worried about land slips. Troopy got pushed to the back of my mind. 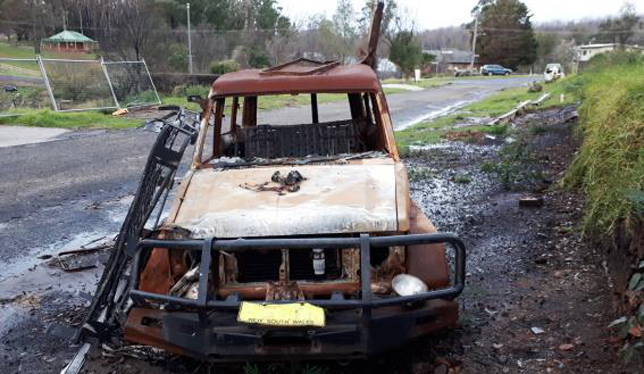 August: The Shoalhaven River flooded, reaching its highest peak in thirty years. People who had evacuated to rentals after the fire burnt them out had to evacuate again. Troopy remained parked.

September: Owners of the grey rental house plan to rebuild; the first in our street. Council put a yellow removal warning sticker on Troopy’s bonnet. A week later two men arrived with a crane in a truck. I met Troopy’s owner.

He told me he was away on the fire morning, protecting another property, but he returned in the late afternoon to see the house and his cars burnt out. He had finally gotten his act together, he said, to come back to our street and take Troopy away. 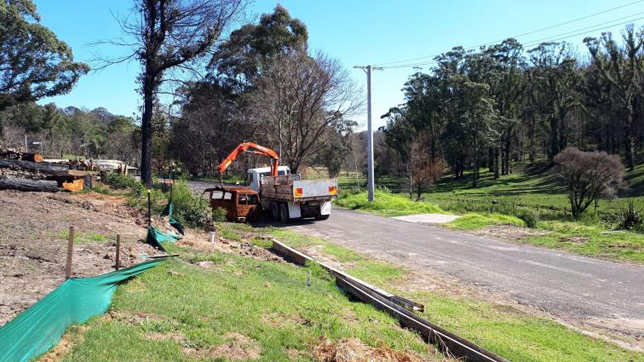 The men didn’t need a flattop truck for the job after all. Over nine months, Troopy had shrunk to fit into the tray of a tipper truck. 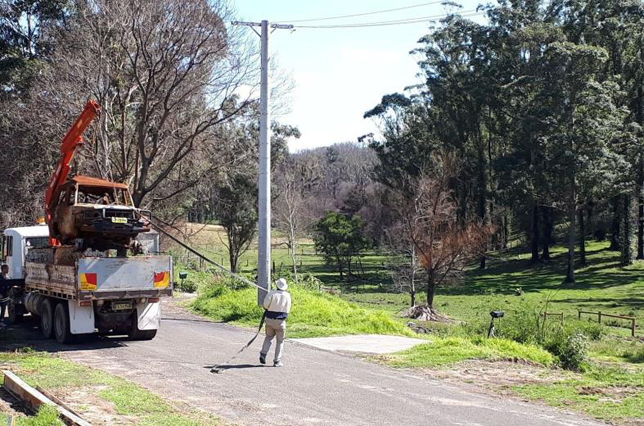 Surviving these last nine months, we have all shrunk.

Elanna Herbert is a poet and short fiction writer born in Canberra, who has lived in Perth and the NSW south coast. She was runner-up, Queensland Poetry Festival’s Emerging Older Poet’s Mentorship 2020 and 2018; awarded a Katharine Susannah Prichard Writers’ Centre fellowship in 2019; and in 2020 was awarded a Varuna ‘Writing Fire Writing Drought’ fellowship, and won the June Shenfield National Poetry Award 2020. Elanna’s poetry appears in StylusLit 8, Australian Poetry Anthology 8 and 6, Westerly — editors desk #authorsforfireys, Axon 9(2), Not Very Quiet, and Meniscus, among others. Elanna has a PhD in Communication from the University of Canberra.