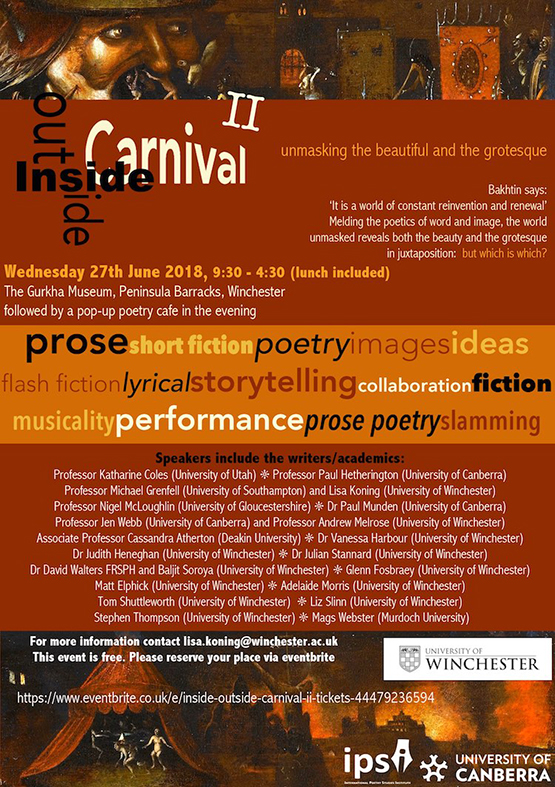 We were delighted to host the 2018 Inside/Outside Carnival II Symposium, a collaboration between the International Poetry Studies Institute at the University of Canberra, and the Faculty of Arts, University of Winchester. Tipping a hat to Bakhtin, as we did for the 2017 symposium, we invited contributors to toy with the ambiguity of Carnivalesque. Ideas such as reinvention and renewal, and of how the world comes together to meld the poetics of word with imagery, underpinned this poetry and prose symposium.

The event attracted over twenty international speakers who delivered papers on subjects as diverse as satire in the twenty-first century, Russian folk tales, personal grief, political protest, football, apophasis and Trump, musicians, historical fiction and Bourdieu, and surrealist artists. While this issue of Axon: Creative Explorations is a celebration of critical and creative interventions on the theme of Carnivalesque, it is also a testimony to the synergy that exists in combining the creative and critical. Some of the works included here were presented on the day, some were poems read in the evening, and others were reactions to the ideas explored. The outcome of the symposium is this collection of images, posters, papers, essays, prose and poetry, demonstrating that one day can result in so much discussion, and so many thought-provoking ideas.

There are discernible threads weaving a pattern through the papers, poetry and images presented here: most are explicitly inspired by Bakhtin’s idea of Carnival; others address the grotesque and the strange; there are representations of the disorder and chaos that encompass a world turned upside down, and depiction of characters who embody the extravagance and mockery associated with such a festival.

The issue opens with Katharine Coles’ paper, and its epigraph from Sarah Perry: ‘Sometimes I forget I’m a woman—at least—I forget to think of myself as a woman’. Mags Webster discusses apophasis and Donald Trump, Cassandra Atherton and Paul Hetherington reveal a coming-together in a critical paper / poetry work that stretches the convention of journal articles. Vanessa Harbour shows how children’s books can offer a source of hope and escape; Michael Grenfell and Lisa Koning bring together sixteenth-century painter Pieter Bruegel the Elder, and twentieth-century social theorist Pierre Bourdieu, to explore reflexive aesthetics in creative practice. Glenn Fosbraey’s explorations of Morrissey, Paul Munden’s discussion of Nigel Kennedy’s bizarre football match cum concert, and Jen Webb and Andrew Melrose’s critical and creative intervention on forced migration, fill out the scholarly paper contributions. Woven through these are creative interventions in poetry, image and prose that respond to the topic, using disorder, extravagance and mockery in a most carnivalesque way—including Russian snow maidens and a blood splattered circus. Poems by Bridget Egan, Lynda Robertson, Sally Russell, and Julian Stannard; Tom Spencer, Maria Stadnicka, Miriam Jones, and Wendy Falla; Karina Bush; Lisa Koning, and Tess Ridgeway interact with the papers, and with creative prose by Stephen Thompson, Liz Slinn, Catherine Wild, and Judith Heneghan.

This is the second ‘Winchester’ edition of Axon, and it has been a remarkable journey of collaboration; we are thrilled with the engagement and the creative outputs that are its result.