Sometimes I forget I’m a woman—at least—I forget to think of myself as a woman.

A young man asks the philosopher of enchantment to explain enchantment’s necessary conditions. Number three of three is ‘Woman’.

In Ubud, in rustic spa luxury, I stand swimsuited in a shaft of sunlight before my mirror, and run my clippers, nape to crown. Hair glints and falls over my shoulders.

A flash in the mirror. Five young, sarong-clad men, who have carried my bags and lit my mosquito coils, press noses to my window. When I turn, they applaud. Not they who are caught, novel. Back in the mirror, eyes on me, I resume.

Mary Ruefle says, ‘When you become invisible, you become your inner life’. Not vice versa.

In Van Eyck’s Annunciation, Mary stands by a window, hand raised to welcome or fend her visitor off, who knows, averting her gaze against him.

The angel bears impossible rainbow wings. The lily at Mary’s feet will not fade, though she’s not, depending on translation, necessarily a virgin. An old story: his desire configures her body, its power assent enough for both.

I am meant to watch.

The light’s northern pallor; heavenly brocades celebrating the local cloth economy: with what optical devices, high-tech at the time, did van Eyck effect his minute brushstrokes?

Years ago, I wrote:

Those wings and lilies —

still frankly send me; the Holy Spirit, too, a dove riding a sunbeam straight into Mary’s head,

who looks—not coy—absorbed. The story teaches modesty, submission. But follow Mary’s eyes. She gazes at the future, hatching her idea. Making history.

I found the + words to every thought

Lawrence’s Lou Witt says, ‘I am one of the eternal Virgins … My dealings with men have only broken my stillness and messed up my doorways’ (129).

Does archetype render us hyper-visible or invisible, machines for meaning, ‘pruned’, à la Williams, ‘to a perfect economy’ (54)?

The philosopher disagrees with Freud on all but one fact: male violence is inevitable; the son must kill his father to marry his mother. But in the story behind the painting, the father’s narrative machine kills his son every time, setting others to the dirty work, tick-tock. If father and son remain one, and the sunbeam-diving dove also, who gets the mother?

Both stories transport me again.

The spa arrays itself around the house of Walter Spies, who founded the Neka Museum for Balinese Art, dedicated to making the spirit world visible in ours.

My driver Wayan takes me to temples and sacred mountains. In my sheared head he reads devotion—Buddhist, Christian, Muslim, Animist—and takes me to a Barong dance at his home village. The battle between lion king and demon queen plays out from midnight to dawn.

A long-ago lover insisted long hair on women is a secondary sex characteristic. In the presence of archetype, even scientists can’t always keep their facts straight.

Rapunzel, Rapunzel, let down. All that hair, but she can’t climb out of the story.

The black hair on his head lush as his beard. My now-husband’s locks, pale, flow to his shoulders. Tall as a house, he flies them like a flag for me. I can spot him across any room. I may hide in the crowd, but he always knows where I am.

Can you define the other, for your own uses, without changing it?

Dickinson’s god doesn’t plummet down a bolt of sunlight, but ‘fumbles’, becoming plural before ‘they drop full music on’ (f477a). Approach alternates with retreat; the ‘Ethereal Blow’ about to happen continues not to, hobbled by dashes, ‘further heard — /Then nearer — Then so — slow’, sense suspended in space where waiting-in-becoming becomes its own end.

Still, Dickinson depicts divine ravishment less primly than Van Eyck, ‘scalp[ing]’ the soul, rendering clothing irrelevant. Mind fuck pure and simple, hers is a full-body experience: mind makes body, and vice-versa. In her annunciation, she takes on power in creating it, her pacing impeccable.

Female rapture comes, in her own time, through the head.

The womb has nothing to do with it.

Mary will never again be left alone. Angels loiter. Magi drop in; beasts attend. Annunciations become an industry, and Madonnas with little-old-man-children standing on their knees.

Almost missing is Madonna del parto, gravid, so rare the best has her own museum: ‘this girl’, Jorie Graham writes in ‘San Sepolcro’,

her mantle of weather,

stripping down, desperate to have it over, I think, though Paisley Rekdal sees avoidance in approach:

...  the perspective is such

that if I cover the painting’s

top half with a hand, Mary steps forward;

if I cover the lower, she shrinks back

Also right. Why have we womb-worshippers so seldom painted Mary heavy, aching, afraid? Waldemar Januszczak wonders, is ‘pregnancy just too real, too biological?’ Fraught with memories, as Rekdal puts it, of times

the mother had torn,

around the baby’s throat.

The child of Our Lady of Guadalupe peers from Mary’s belly through a draped window the shape of an open vagina. Biological, with interior decoration, lit by his halo.

My problem is personal.

I ask the philosopher if I have a different relationship with enchantment than he, because I have a womb.

I mean: If your definition makes over half of us agents of enchantment available only to the other half, do you have a problem?

Yes, he says, answering, to be fair, only the part of the question I spoke aloud. He says, ‘Woman is the source of all life.

In Van Eyck’s Arnolfini portrait, the secular master sports a straw hat that still looks trendy today, and holds a woman by the hand. Her robe is lined with tiny tufts of fur taken only from the soft chests of squirrels, thousands of them. Another lesson in economy: what happens to their bodies, their coarse and lively tails? Look over their shoulders, at the mirror: the pair from behind, and facing them, the artist himself, his tunic the blue of her sleeve, a deeper than the window’s northern sky. The man’s grip tells us: he owns her dress, its fur interior, her enormous belly. Everything on and in her makes her his. The future.

In May, the New York Times profiled Jordan Peterson, ‘a University of Toronto psychology professor turned YouTube philosopher’, guru to disaffected young men, a few of whom express their inner chaos by gunning or running down women (Bowles 2018). He says, ‘Clean your rooms’ (not a terrible idea, but) and, ‘Chaos [has been] represented by the feminine ... forever’, concluding, ‘You can’t change it.’

He says, ‘it makes sense that a witch lives in a swamp.’

He, purportedly a scientist, says, ‘They certainly exist.’

Like all the planets in our solar system, the Earth spun itself out of dust, made mostly of nitrogen and helium, into a planetesimal, then finally into the ground our feet so briefly tread. Looking out my window, I see leaf and branch, rock and soil. Beyond my vision rivers flow into the ocean from which all life on earth came, built from carbs and lipids, proteins and acids. Until a few years ago, we believed all life required phosphorus, but scientists have discovered so there now exists a bacterium that replaces phosphorus with its toxic cousin, arsenic. There may be life forms out there, perhaps way out there, that replace carbon with silicon.

Name a planet—Mother Earth, Gaia—any way you want. Ancient Egyptians called the earth male, the sky in its distance and fire female, but naming didn’t make them so. 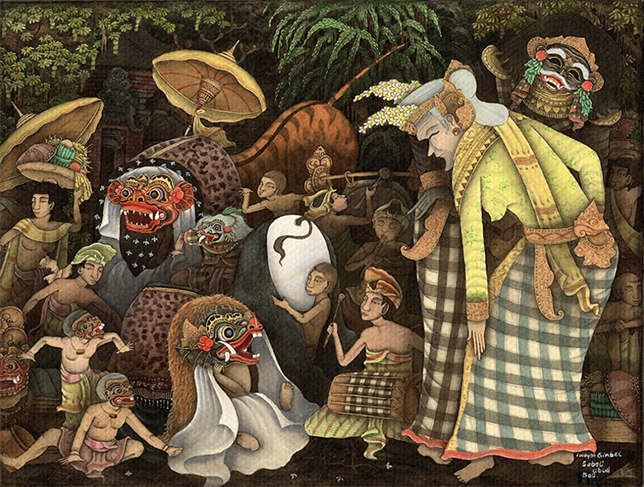 Wayan Gimble.  Collection of the writer.

A museum teeming with demons.

Another lined with Madonnas.

Dickinson, Van Eyck, my philosopher, you, I, all evolved from one single-celled organism who, around four billion years ago, probably in a swamp, split in two. Little wombless cell, little fact, thanks for your ambition. Nature worked it out: put all your eggs in one basket, you have to surveille it; you can’t let it loose to roam.

Nature, on the other hand, sets little bombs everywhere and lets them explode. 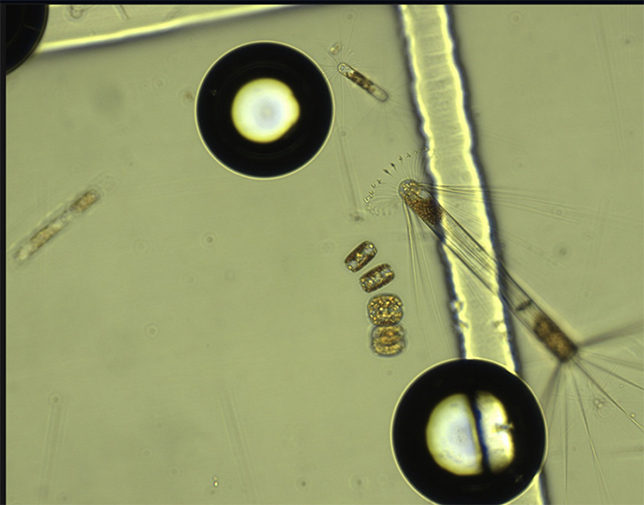 Complex life may have evolved and died out many times before our higher-order ancestors arrived and eventually dreamed up witches, but for over 80% of that time the earth belonged to bacteria and archaea—and there were a lot of them. Are. Phytoplankton generate half the world’s oxygen, and we created ‘male’ and ‘female’ remain a tiny minority. The terms don’t apply to fungi; lichens, which may live forever, reproduce asexually. Some lower plants reproduce through parthenogenesis, as do the odd scorpion, bee, velvet worm, goblin spider, pigeon and turkey; and an entirely asexual, all-female whiptail lizard. The female kobudai fish may become male at reaching her majority; when a female attains the top of the clownfish matriarchy, the dominant male will change to female and replace her in the ranks.

Who could resist enchantment?

My problem is personal because it’s biological. Where difference exists, who is the different one, and who decides what it means? As Guy Claxton says, ‘I am who I am because I am a body’—this one, female among other things; to me normal, chaotic as any, no more. Every pleasure and enchantment that takes me takes this flesh.

Which has a womb. Also an appendix. Or did, though I noticed its presence no more than I do, now, its absence, and many times less, I am sure, than any man present thinks of his penis.

Are you thinking of it now?

Most days of my life, when has my womb ever occurred to me, unless in the moment it was being inconvenient? I’ve thought less about reproduction than pleasure or love, which pre- and post-date my fertility. I have no children, but even a woman who connects pleasure with that kind of creation will, vastly most of the time, work to prevent rather than enable it, its possibility an impediment to, not a vehicle for, enchantment. Her tools for doing so may make her a witch. Male imagining may constrain her.

Enchanted, I am my least gendered, most queer, beside myself, self and estranged, taken not by otherness but within it, my animal body, its desire and pleasure, its fiery orbits, its suspension and velocity in time.

A woman, I forget to think of myself. I forget the gaze that writes me over, Madonna or witch, and gaze beyond the frame, betraying nothing.

Under the microscope in the lab, diatoms, golden, arrayed with spines and tails and jewel-like structures: tiny parachutes, elaborate balloons too small to see except through miraculous lenses—no ordinary creatures; breathers-out; givers of life; you ancient ones who will survive us – joining as we do into colonies fantastically shaped: stars, streamers, fans defined by bodies—

Given a choice, taking one, I choose the sky.

Is it different for you?

Katharine Coles’ seventh collection of poems, Wayward, is forthcoming from Red Hen Press in 2019; in 2018, she published a memoir, Look Both Ways. She has received awards from the NEA, the NSF, the NEH, and the Guggenheim Foundation. She is a Distinguished Professor of English at the University of Utah.